Let’s Get Ready For Foals!

Foal season is almost here!!! There, I pretended baby horses excite me. They don’t. Everyone brings in pictures of the babies after their Well Baby Checks. Then there is oohh-ing and ahh-ing over them. And “Oh look at the chrome!” and “Wowza, that hip!!” and I’m left wondering why my chin isn’t getting scratched. However, if the babies are going to come anyway, I may as well do my best to get you humans ready.

The Best Offense is a Good Defense

You might think I said that wrong, but I got it right. Start your foal off on the right foot. Vaccinations for Encephalitis, Tetanus, West Nile, Flu, and Rabies should be given to mares about 4-6 weeks before they are due to foal. This gets their immune system churning out protective antibodies. Those antibodies are then dumped into the all-important first milk, colostrum. The foal’s intestines absorb the antibodies and Viola! we have our immune system for the first few weeks of life. Without those all-important antibodies, foals can’t fight off pathogens like bacteria and viruses until their own immune system kicks in at about 3 months of age. In other words, colostrum is your foal’s best defense against the harsh world.

These are the two most important things to have on hand for the actual foaling. There are a few other things: thermometer, Fleet Enema, hay string (because really, when isn’t hay string necessary?), Bute or Banamine for mom, and a small notebook and a pen. An extra human is a nice thing to have on had as well if you have one available.

Let’s discuss the use of each of these items.

Scissors: A very clean, very sharp pair of scissors should be near your foaling area. These will be used if a red bag delivery happens. A red bag is just what it sounds like: a red bag-looking thing comes out the vulva instead of the normal white. If that happens, it is an absolute emergency! You don’t have time for one of my Docs to come to you. You must cut the bag open and help delivery the foal. The red bag is the placenta separating from the uterus before it should. The foal can’t break through the placenta like it can the amnion (the normal white tissue), so you have to cut it for foaling to continue. This is where the extra human comes in handy. They can call 352-474-5007 and talk with one of my fine Docs while you are cutting the placenta.

Towels: Just plain useful to have around. If it’s chilly out when your foal decides to be born, you can dry them off. After she has bonding time with the foal, you can use them to start cleaning up your mare’s legs. You can use them to wipe the tears of joy from your eyes, or the sweat off your brow.

Thermometer: Used for the obvious thing: to get a temperature. This can be very important information on both mom and baby if things aren’t going quite as expected. An extra human is also useful here since foals can be incredibly squirmy about getting their temperatures taken.

Fleet Enema: Foals should have a dark, tarry first stool called meconium within about an hour or two following birth. If they don’t or they are experiencing constipation, we recommend 1 (ONE ONLY) Fleet Enema. If that doesn’t fix it, call 352-474-5007. You’re going to want to at least talk with one of my docs. Oh, and if you thought they squirmed for their temperature, you’re really going to want that extra human for enema administration.

Hay String: Extremely useful for tying up the placenta while you are waiting for it to drop. DON’T EVER EVEN THINK ABOUT PULLING ON THE PLACENTA! Ideally, mom shouldn’t step on it, either. As an aside, the placenta should be fully passed by three hours post-foaling. Once it passes, put it in a bucket of water so my Docs can check it later. If it doesn’t pass by three hours, guess what number you should call? Yep 352-474-5007. Not necessarily an OMG emergency, but the Docs are going to want to know.

Bute or Banamine for mom: Good to have on hand. DO NOT give without talking with one of the Docs first. If foaling was rough, or your mare is not handling full, painful udders well, these anti-inflammatories can help. They can also mask important pain signs, which is why my Docs like to know if you’re giving it.

Notebook and pen: Once foaling starts you will be sure it is taking approximately 7,382 hours to happen. By writing down the times things start to happen, you can keep yourself honest about how long things are actually taking. Also useful for writing down questions to ask the Docs later.

Once it’s time, things happen fast in horses. Things should be progressing very quickly from the moment you see water break, until the entire foal is out. Foaling in horses often takes as little as 15 minutes. Longer than 30 and you better call (you know the number now) 352-474-5007. Because things happen so fast in horses, there is little room for error. If you have any questions about how foaling is going, call us. My Docs would rather talk to you 100 times for something that isn’t a big deal, than have you not call for the time it is.

There is now a foal laying down, having just been born, and a mare laying down thinking Whew that was a lot of work! and you watching it all thinking What now? Never fear: we have a rule for this. By 1 hour after foaling, your foal should be standing, by 2 hours the foal should be nursing, and by 3 hours the placenta should be passed. If any of these things don’t happen, guess what? Call 352-474-5007. While waiting for the standing, the nursing, and placenta passing, I recommend posting lots of pictures on Facebook, Instagram, SnapChat or whatever new fun thing you humans are doing these days. 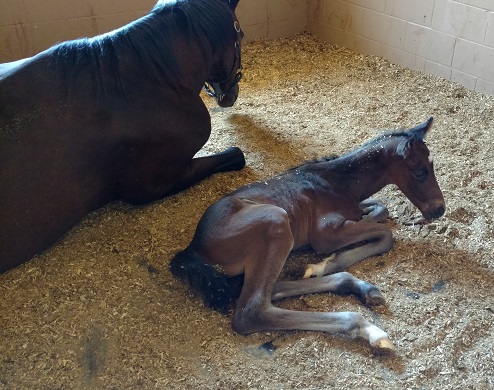 Call the Clinic in the morning to schedule your Well Baby Check. If you haven’t done it by now, take a minute and put the number in your phone so you’ll have it when you need it: 352-472-1620. On the second phone number line, put in the emergency number so you can get the doc in the middle of the night: 352-474-5007. Oh, and you’ll also want a phone charger in the barn. Trust me.

Search for a blog on any topic!