The Facts on Strangles

Let’s continue this little vaccine tour. I know I’m enjoying it! This week, let’s talk Strangles. With a name like Strangles, how can it not be fascinating?

Strangles is caused by a bacteria in the streptococcus family. Other fun things caused by this family: Strep throat, MRSA, and pneumonia. Family reunions must be an unbelievably good time! To be honest though, the bacteria are only part of the problem. The immune system is the other part. The immune system likes to respond with tons of white blood cells (this reads as ‘pus’ to us normal people), and those white blood cells turn into abscesses.  Those abscesses are where the real fun begins.

If your horse gets Strangles, snot is what you have to look forward to. Lots of snot and a high fever (103F, or even higher) are often the first signs of Strangles. From there, lymph nodes start swelling, abscessing, and often popping open on their own. It’s pretty awful. Those lymph nodes swelling is where Strangles gets its charming name. If they swell and don’t rupture open, they can cause enough constriction of the throat to cut off that airway. Luckily, with my Docs around, you don’t have to worry about that. The swelling of the lymph nodes and the extreme amounts of snot do help distinguish Strangles from the other fun upper respiratory diseases of Rhinopneumonitis and Influenza. Typically those last two have fevers, some snot, and some lymph node swelling, but nowhere near the levels Strangles produces. These clues, and a culture of the snot, help my Docs diagnose a case of Strangles.

Once the Docs have a positive diagnosis for Strangles a few things happen: 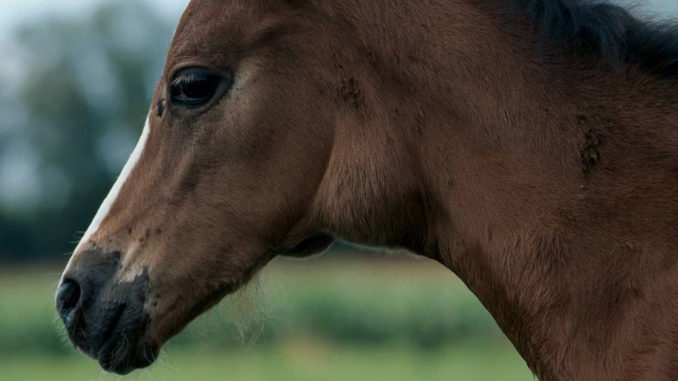 To give or not to give…The Antibiotic Debate

Horse people: Two people, three opinions. That’s true here, too. Generally, my Docs monitor Strangles horses to see how they are doing. If they are handling things OK, then they hold off on antibiotics. If they aren’t eating well, or they are getting so much swelling they are having trouble breathing, they will then give antibiotics.

Horses that have been vaccinated for Strangles….. may develop milder signs of upper respiratory tract infection. – ACVIM White Paper on Strangles.

That’s a direct quote from the super-smart Medicine Specialty Veterinary group. Now, I don’t know about you, but that doesn’t sound like a ringing endorsement of the vaccine. Turns out the vaccine for Strangles may help, but that’s about it. This vaccine can also have some pretty serious side effects. For example, if your horse has been exposed to Strangles, the vaccine may cause something called Purpura Hemorrhagica. This is a super-fun side effect where the body attacks the blood vessels. In horses, it often leads to laminitis as well, since that’s pretty much how horse feet respond to anything serious.

Moral of the vaccine story: there are very specific circumstances where this vaccine is helpful. For example, young (think yearlings and 2 year olds) horses who will be going to large sales. These horses are exposed to a ton of other horses, under stressful circumstances, after shipping. That’s a recipe for infections. Think about humans and airplanes. The average show horse doesn’t experience these same levels of stress, and they have a more mature immune system.

This is a case of ‘just because there is a vaccine doesn’t mean every horse should have it.’ Make a plan with my super-smart Docs for your horse, and your lifestyle.

Can you ever have enough Tuesdays with Tony? I didn’t think so. Now scroll down a wee tiny bit further and subscribe so you don’t miss a thing!

← Everything You Need To Know About Tetanus Ground Manners Matter! →

Search for a blog on any horse-related topic!